The Whole Music Club’s conception actually dates back as far as 1960, when the U of MN decided to carve out a new room deep in East Bank’s Coffman Memorial Union. For years students knew the space (using a fitting moniker) as, “The Gopher Hole.”

By the late 1960’s, college campuses had become the nation’s cultural centers. Leading the both the artistic and social revolution were the introspective and thought-provoking musicians making a name for themselves at campus coffeehouses across the nation. In 1968, Coffman decided to convert the “Gopher Hole” into the newly named “Whole Coffeehouse.” A student committee was formed to turn the space into a performance venue for local and touring folk musicians. Contacts were made with other universities in the Midwest to create a coffeehouse network for a wide variety of musicians.

In the beginning, the young coffeehouse provided a gritty, bohemian showcase for unknown singer/songwriters and poets (the most notable being poet and U of MN alumni Garrison Keillor). Free peanuts were the Whole’s trademark and admission to the shows was either free or as low as $1.50. The club hosted all kinds of music and within a few years, the Whole blossomed into the Twin Cities premier hotspot for non-rock n’ roll entertainment. The list of early Whole performers is impressive: Leo Kottke, Sun Ra, Robin and Lucinda Williams, Jim Croce, “Spider” John Koerner, John Andersoni, NRBQ, and Bonnie Raitt, to name a few. With the help of these performers, the Whole Coffeehouse became known as one of the top local venues for touring folk musicians in the late 1960’s and early 1970’s.

However, as the renaissance of rock began to take over the local music scene, the Whole, inevitably, went through a series of changes. The world was changing gears as the Vietnam War was over and student activism was dying off. The 1980’s U of MN music connoisseurs wanted to hear a fresh and progressive sound called “new wave.” The Whole was ready to deliver. The first band to play this genre of music at the Whole was the short-lived group, New Psychenauts in the spring of 1983. In the fall of that year, the Whole showcased The Replacements and the club became a full-fledged rock venue. To reflect this change, the “Whole Coffeehouse” became the “Whole Music Club.” It seems that coffee had temporarily gone out of style.

Also building momentum in the Twin Cities was another genre of music called “hardcore punk.” The Whole, always tuned in to the musical cutting edge, started hosting punk shows, once again captivating audiences of all ages. The hardcore phase peaked in late 1983 when the Whole brought The Dead Kennedys, Hüsker Dü, and Man-Sized Action to the Great Hall of Coffman Memorial Union. The City Pages, a local alternative publication, called the event, “the largest scale hardcore event in the state’s history.” However, by the mid-1980’s, hosting these popular hardcore shows became dangerous. In 1986 the Whole Music Club was shut down, citing to injury to a patron.

Following a quiet 18-month hiatus, students managed to re-open the Whole Music Club as a showcase for indie-rock during the late 1980’s and early 1990’s. Local groups such as The Gear Daddies, The Funseekers, Arcwelder, and The Blue Up played the Whole during this time. Also making a name for themselves were up and coming bands like Soul Asylum, Mudhoney, and Soundgarden. These now nationally recognized rockers were able to hone their skills at the Whole before moving into the musical mainstream and gaining widespread popularity in the early 1990’s.

In recent years, the Whole has carved out a more ambitious niche, inviting national stars, They Might be Giants, Soul Coughing, and Green Day to perform. Currently, the Whole Music Club continues to provide a venue for many types of music. Indie, guitar-pop, ska, reggae, jazz, and punk all find appreciative audiences at the Whole.

Throughout 1999-2001, Coffman Union underwent a significant renovation and thus the Whole was closed. However, the undeterred students of the Whole Music Club booked with the same creativity and integrity, booking performances by Les Savy Fav, Unwritten Law, J-Live, Heiruspecs, and many more, but in new venues throughout campus including the North Star Ballroom in the St. Paul Student Center.

Upon the momentous reopening of Coffman Union in early winter 2001, the Whole Music Club came out of the gates charging with a 12-band Battle of the Bands in Coffman’s Great Hall with the winners Sui Generis being awarded the privilege of headlining the first show back in the Whole.

Since the reopening in 2001, the Whole Music Club has featured acts including Brother Ali, The Frogs, Nada Surf, The Bravery, Limbeck, New Amsterdams, Cowboy Curtis, Lateduster, Happy Apple and many more.

(Thanks to Simon Peter Groebner, a hardworking Whole coordinator/volunteer from ‘92-‘94, for compiling this history. Simon has gone on to write for The Minnesota Daily’s Arts & Entertainment weekly and The City Pages.) 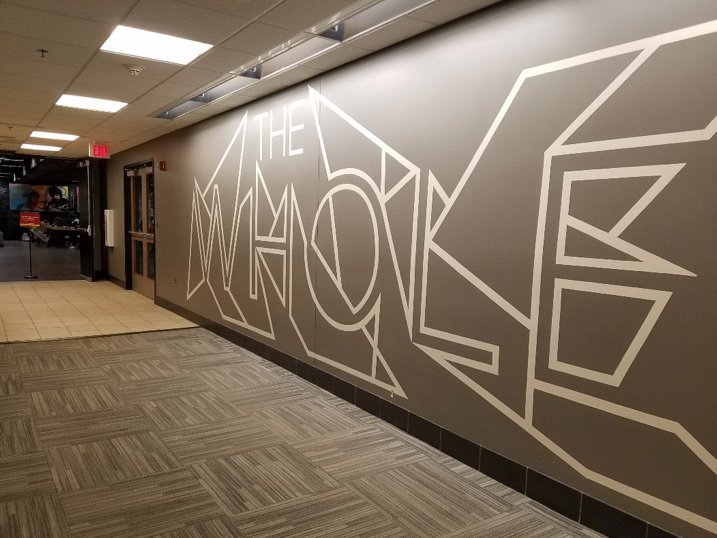