The Goldy Gopher statue was completed in 2013. It was designed to impact school pride and spirit by allowing the campus community to interact with the school mascot on a daily basis. The statue is meant to foster traditions that will have long-lasting impressions on today's student population, as well as future generations to come. The bronze Goldy Gopher statue stands six feet three inches high on Coffman Memorial Union's front plaza. The granite block "M" spans sixty-three inches in width, twenty-four inches in depth and forty-eight inches in height. The statue was installed during an elaborate Welcome-Back-to-Campus event on Sept. 23 of 2013.

Nicholas Legeros has a Masters of Fine Arts degree from the University of Minnesota. For more than twenty years he was an Artist-in-residence and instructor at Minnetonka Center for the Arts. He also taught for Metropolitan State University, Breck Schools and the Edina Art Center. Mr. Legeros left teaching to pursue a full-time career as a sculptor. In addition to the bronze Goldy Gopher, his recent large commissions include a statue of Sid Hartman for the Target Center and a 17' high statue of St. Joseph for St. Joseph's Hospital. 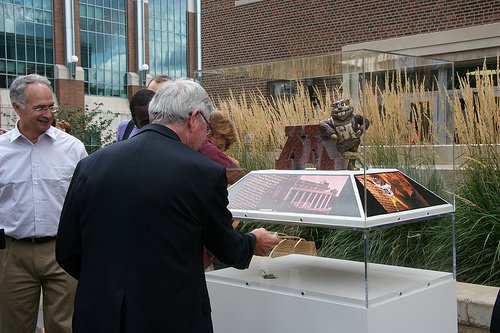 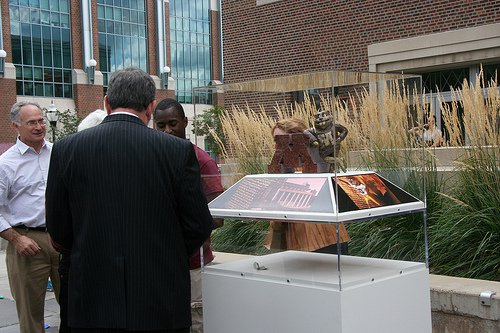 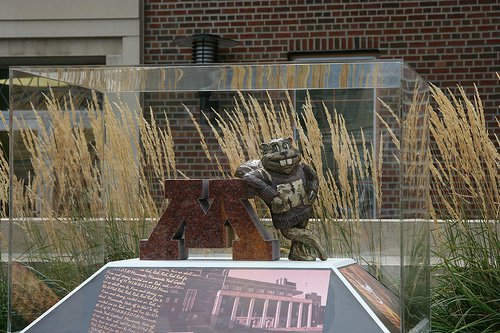 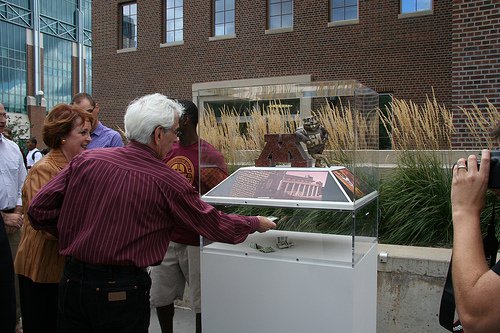 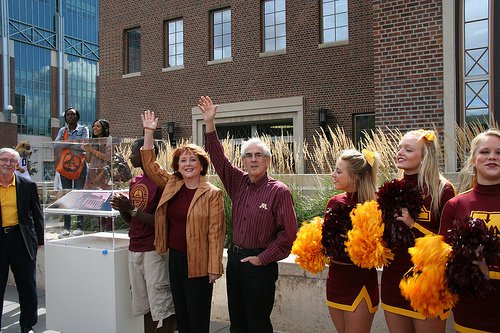 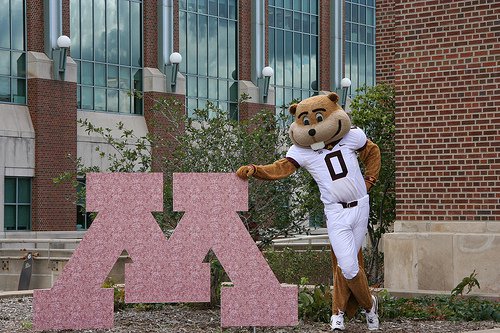 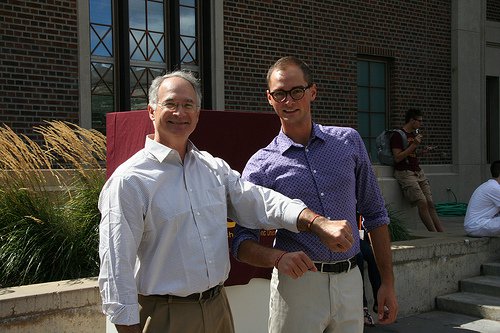 1. What material will the statue constructed out of?

The Goldy statue will be made out of bronze and granite. Copper is a primary component of bronze and remains a plentiful element on our planet. Bronze is a 4,000 year old process with techniques handed down from generation to generation. The bronze used to create the Goldy statue will allow this image to last for thousands of years. The sculpture can also be recycled if need be, by a process of disassembling and melting down. The cost of copper and bronze has increased significantly in the past ten years due to an increased demand from the countries of India and China. This has also increased speculation by investors who wish to profit on a rising market price. As a sculptor working in bronze for over 35 years, Nicholas Legeros saves every scrap of bronze that does not end up in the final product and reuses it.

2. How is the statue being funded?

We did not request any additional Student Services Fees dollars, tax dollars, or University funds for the Goldy statue. The statue fundraising was student-driven and many alumni, donors, students, staff, faculty and campus visitors contributed. Funds were run through the University Foundation so donations were tax deductible if desired. All donations were completely voluntary and the Office for Student Affairs and Dean of Students will provide matching funds up to $50,000.

3. What is the statue funding source for the Office for Student Affairs and Dean of Students?

The University’s beverage contract (with Coca Cola) provides discretionary funds that the office administers to enhance student life and build community for students attending the University. This initiative both supports community building among students and contributes to school pride and spirit.

The idea originated at the June 30, 2011 President Kaler Inauguration Student Engagement Committee which was charged with brainstorming possible new traditions for the University of Minnesota. Due to the time constraints, the Student Engagement Committee was unable to fundraise or select an artist in time for President Kaler’s Inauguration. Maggie Towle, Chair of the Student Engagement Committee brought the idea to the Student Unions & Activities student Board of Governors. The Board of Governors unanimously endorsed the Goldy statue and fundraising idea at their March 22, 2012 meeting. The Board of Governors and Visual Arts Committee of the student Program Board determined the sculptor and location for a Goldy statue in front of Coffman Union. Given the statue was initiated by the students; we foresee an increased sense of pride and connectedness within the student body. The Board of Governors felt this project would work well as a student-to-student driven fundraising campaign and felt there would be a lot of support for the project from students, staff, faculty alumni, and the University community as a whole.

5. Why is the Goldy statue being placed in front of Coffman Memorial Union?

Goldy Gopher represents the entire University community including academics, athletics, arts, students, staff, alumni, and campus visitors. Coffman Union is the central gathering place used by the entire University community and averages over three million visitors annually. In determining a location for the statue, the Board of Governors kept in mind that the statue would be a tool to bring people of all ages and University affiliations together. This makes the northeast corner of Coffman Memorial Union near the east wing of the building an ideal location for the statue. A bronze Goldy Gopher statue in front of Coffman Memorial Union will be something that every student, as well as the overall campus community, will be able to equally enjoy and interact with on a daily basis.

6. What is the cost of the statue?

The Goldy Gopher statue itself will be constructed of bronze and Goldy will be leaning on the University “M” symbol, which will be made of maroon colored granite. The total cost for the sculptor, materials, and installation will be approximately $95,000.

Another way in which we hope to keep the project within the University community is by choosing a University of Minnesota alumnus as the artist for this project. Nicholas Legeros has a Masters of Fine Arts from the University and has sculpted several statues around the Twin Cities metro area including Sid Hartman outside of Target Field.

8. When will the statue be installed?

It will take approximately 7-8 months to produce the statue. We expect to be able to unveil the statue in fall 2013.

9. Why now when the economy is tough and tuition and fees keep increasing?

Donations for the Goldy Gopher statue were completely voluntary. The rising tuition and fees is trending upward nationally due to rising costs and less legislative support for Higher Education. Material and labor for the statue will also increase over time. Given the rich history of the mascot, and what Goldy represents, the statue will serve as an icon for all University members, regardless of their University affiliation with the school. It will act both as a common area for students to gather and a collective image for promoting school spirit. The statue has the potential to foster new traditions among the University of Minnesota student body and instill a sense of pride for the University of Minnesota.

10. What will be the ongoing maintenance costs of the statue and how will that be paid for?

Ongoing maintenance costs will be minimal. The bronze Goldy will be coated with a Urethane finish designed to last 25 years. The only maintenance needed will be to have the space around the statue cleaned regularly.

11. How will the statue be secured to prevent theft/damage?

The statue will be secured through a footing system of bolting, welding or epoxy based on needs determined prior to installation. Fasteners will consist of stainless steel to securely mount the statue. Security cameras currently exist at the statue site.

12. How were funds collected? Who is handling the funds?

Funds were run through the University Foundation so donations were tax deductible if desired. Faculty and staff also had the opportunity to donate using payroll deduction. Silicone bracelets were sold for a $2 donation at Student Unions & Activities events and retail locations (Gopher Express, Gopher Spot, Goldy's Gameroom, Info Desk, Coffman Theater Concessions, Coffman Union Post Office), Homecoming and Athletic events, University Bookstore, and the U Card Office. The bracelets cost $0.20 and $1.80 went towards fundraising efforts for each bracelet sold.